Around the world, political commitment has helped to foster the creation of large biofuel markets. Many governments have set biofuel mandates and targets for both first generation (1G) and second generation (2G) biofuels. However, 2G biofuels (i.e. cellulosic ethanol) are thought to be one of the more promising long-term alternatives to petroleum-based fuels. Unlike 1G biofuels such as corn-based ethanol, 2G biofuels can be made from agricultural waste, avoiding competition with the food industry over edible crops. In addition, their CO2 reduction potential is significantly larger than that of 1G biofuels. More than 25 years after the cellulosic ethanol-industry emerged, the conversion of lignocellulosic biomass to biofuel is finally moving to a commercial scale.

Lignocellulosic biomass – conversion processes
There are a number of different options in order to convert lignocellulosic biomass to higher value products. One of them requires enzymatic hydrolysis which is conducted through so called cellulase. Cellulase refers to a suite of enzymes produced chiefly by fungi, bacteria and protozoans that catalyze cellulolysis (i.e. the hydrolysis of cellulose). If applied to pretreated biomass, they transform certain plant fibers to sugars. These can then be fermented and refined to cellulosic ethanol and a wide range of biochemicals. 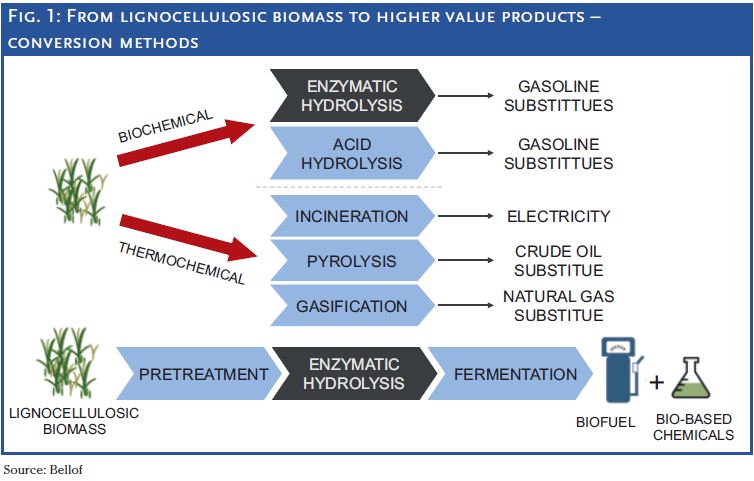 Despite setbacks – 2G biofuels are gaining importance
For the US and Europe, enhanced political support of 2G biofuels over 1G biofuels is represented by the Renewable Fuel Standard (RFS) – a federal mandate for the blending of biofuels into US transportation fuel – and a recent proposal from the European Commission (EC). The RFS limits blending of 1G biofuels to 15 billion gallons per year (see Figure 2).The EC proposal contains measures aimed at eliminating incentives for the continued displacement of food crops for fuel. Despite its bright projected future, the cellulosic ethanol industry is still in its infancy. One of the bottlenecks has been the cost of cellulase enzymes. Throughout the last 10 to 15 years, hundreds of millions of US dollars have been invested into enzyme research in order to enhance the efficiency of the conversion process. Even though a lot of progress could be made, there have been numerous setbacks in the past. For the last three consecutive years, the US Government had to reduce its mandate for 2G biofuels, because the projected volume of cellulosic biofuel production couldn’t meet the volume specified in the statute. The 2010 mandate of 100 million gal was lowered to 5 million gal, the 2011 mandate of 250 million cut to 6.6 million and the 2012 mandate of 500 million lowered to 8.65 million. 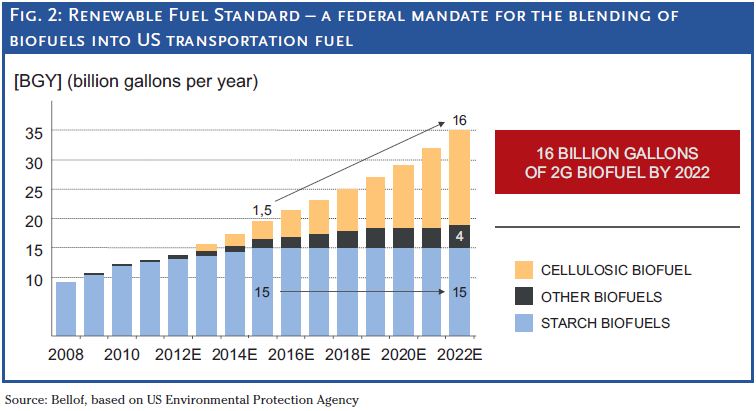 Conclusion
However, the industry is slowly moving towards commercialization. Last year, Beta Renewables started operations at their Crescentino site in Italy – the world’s first commercial-size 2G biofuel plant. In addition, we witnessed various groundbreakings for large biofuel plants across the globe. With that progress, we can expect numerous plants to follow as soon as the first commercial plants prove to be running successfully. So, even though the industry is still behind initial expectations, 2G biofuels are finally becoming a reality.

“In all major regions, commercial plants are coming online”

In recent years the economic pressure and the demand for ecological and sustainable energy has risen. At present the biofuel industry can not reach the political and social requirements. GoingPublic talked to Poul Ruben Andersen, Vice President Bioenergy, Novozymes, about how Novozymes asseses the situation and meets demands.

GoingPublic:What are your future expectations regarding the market for biofuels and biobased chemicals?
Andersen: For the coming years, we see great potential for next generation biofuels and biochemicals, while we expect the markets for existing (1G) biofuels to level off. The world’s first commercial cellulosic ethanol plant started in September 2012 and there are a couple of plants about to start in China. In all major regions – North America, Latin America, Europe and China – commercial plants are coming online within the next two years.

GoingPublic: What are the main drivers for this development?
Andersen: The increased demand for oil is propelling the development of biofuels and biobased chemicals as a renewable alternative. It also creates a strong political desire for energy/supply security, job creation and CO2 reductions.