In recent months industrial biotech has gotten more and more into the investor’s focus due to some significant M&A activities triggered by prominent participants. In the wake of the sector’s increasingly higher visibility, several not-yetlisted companies were able to raise substantial amounts of money.

Stock market: A rollercoaster of fun – finally! After a tremendous beginning, investors had to go through highs and lows in the last 12 months when looking at the leading German stock market index DAX. Having continued its recovery in early 2012, after the deep 2011 drop, by moving up 18% by mid of March, the index shifted into reverse gear and fell back more or less to the 2012 starting point by early June. From there the index went more or less straight up 27% to 7,612 points at the year’s end or 14% year-over-year (YOY) to 7,652 points. One dominating driver was Mr. Draghi’s announcement that the European Central Bank (ECB) will buy-back government bonds with no limitations in volume, which clearly had a positive impact on most Western stock markets. 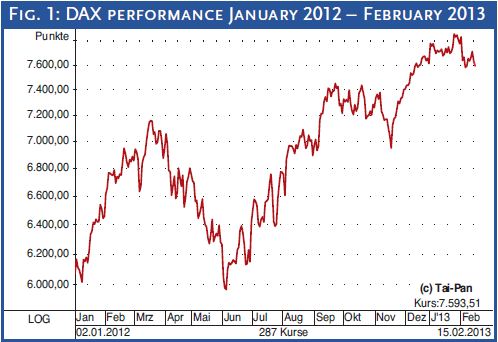 Eliminating this effect looks quite difficult and individual topics could also have added to the positive performance, might have slowed down or inverted it. Even pure-play industrial biotech companies have not been a kind of safe harbour as investors might have realized profits (not too bad!) in 2012. Now it seems that investors arecoming back again and are keeping an eye on them, which might be a consequence of big chemicals’ activities (see below) bringing the sector into focus (see table 1). In last year’s issue, we elaborated on companies active in clean tech/industrial biotech, which went public by means of an IPO (initial public offering) during a period of economic uncertainties, and which have given existing investors good returns. However, share price performance of most of these companies has not been continuing as excellently as it had been in the wake of their IPO, but still continuing. Looking to North America with its agile venture capital scene, Enerkem, a waste-to-fuel company, has raised CAD 37 million in parallel with the opening of the first facility in Edmonton in January 2013 after cancellation of a planned IPO in spring 2012. A much larger financing round closed Elevance, a specialty chemicals producer, collecting USD 104 million in a series E round instead of doing an IPO with a capital increase. This picture is being completed by German company, B.R.A.I.N. AG’s EUR 60 million financing round at the end of 2012. The so-called IPO window remains to be closed, but fortunately companies still find other financing sources. 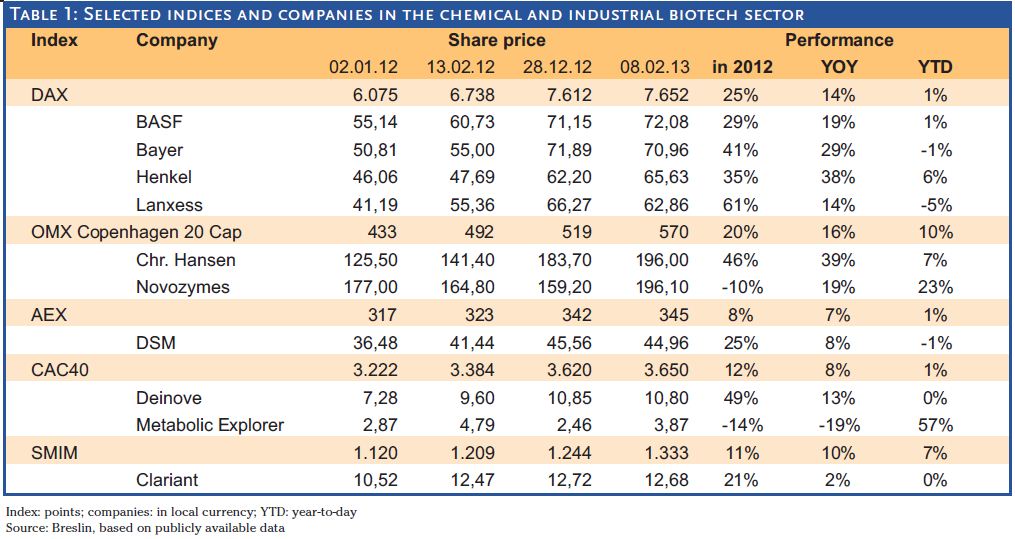 Big Chemicals and the deep pockets It seems to be that the chemical “tankers” are starting to move more aggressively following trendsetters BASF and DuPont. Some early adaptors have also been e.g. Clariant and Lanxess (see Industrial Biotech 2012, page 38). In the recent past, this has led to the first signs of more serious competition for transactions between these industry players appearing at the horizon. Dutch DSM could successfully acquire private US Forbitech, a leader in customized food ingredient blends for the nutrition industry, for about EUR 495 million (2.3x sales; 8.8x EBITDA). BASF instead had first to prolong the tendering period and in a second step to also increase the cash offer in order to sustain the necessary 90% share for Norwegian fish oil specialist Pronova BioPharma. Finally, BASF will have to pay EUR 684 million (2.7x sales; 5.5x EBITDA) representing a 34% premium on Pronova’s pre-offer share price. The omega-3-fatty acid producer generates gross profit margins in the high 70s and EBITDA margins are well above 40%, in this respect the high multiples are looking better, but the takeover is still no bargain. Clariant increased its footprint in personal care by taking over privately-held French CRM, a manufacturer of natural ingredients. As financial details of the acquisition not being disclosed, a valuation of the deal is not feasible, but it could be assumed to be in the “typical” range. Compared to afore mentioned deals, the “battle” to acquire US listed Schiff Nutrition became a bit preposterous due to Bayer’s high bid. The Leverkusen-based company made an EUR 920 million (4.6x sales, 38x EBITDA) offer for 12% EBITDA margin generating business, reflecting a 47% premium on share’s pre-announcement closing price. Then, UK Reckitt Benckiser made a rival bit for Schiff (~EUR 1.1 billion, 5.4x sales, 43x EBITDA) putting some whipped cream on top to make the deal quite cosy for investors. Lucky Bayer!